Go Back to Shop All CategoriesBlog
HomeBlogBlogShrimp In Thai Coconut Sauce

Instructions
Peel and devein shrimp, leaving tails on. Place the shrimp in a bowl with 1 tablespoon of the oil, garlic, kosher salt and red chili flakes. Toss to coat and let marinade for 10 minutes.

Heat a 12-inch skillet over medium high heat with 1 tablespoon of oil. Add the onion and peppers and cook until softened, about 5 minutes.

In another bowl or 4 cup measuring cup mix the coconut milk, fish sauce, peanut butter, lime juice, brown sugar and ground ginger and stir well. Transfer the cooked onion and peppers to the skillet and pour the coconut milk mixture of the peppers. Bring to a boil then reduce to simmer and cook until reduced by half, about 5 minutes.

Add the shrimp to the skillet with the basil and cilantro and toss to coat. Serve over rice or noodles. Garnish with more cilantro and basil, chopped green onion and sliced red jalapeño of desired. 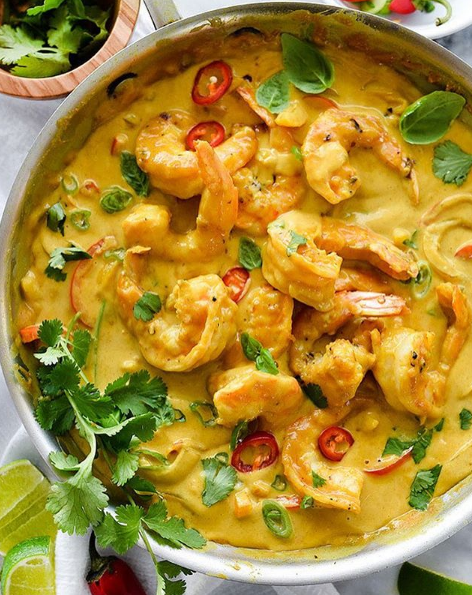