Nope this is not a joke. His dad is called Akira Toriyama and must be very proud. He’s 5’8″, had a monkey tail as a child and also fought off some of the universe’s biggest threats. He beat his friend Pikachu and the rest of the Pokemon for the spot of ambassador of the 2020 Tokyo Olympic games. We’re of course talking of the unique Son Goku. 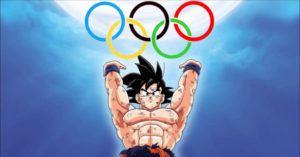 The Tokyo Olympics are three years away but the Olympic committee has already settled on a decision. Goku is a worldwide renowned Japanese character and he’s worth investing in merchandise for the Olympics. He will feature alongside other Japanese pop culture icons Naruto, Sailor Moon, One Piece‘s Luffy and even Mario.

During the Rio Olympics closing ceremony on August 21, 2016, the Japanese prime minister announced that Japanese culture will be fundamental for 2020. Shinzo Abe actually came out of a green tube dressed as Super Mario. Aiming for a younger audience, the Olympic committee is hoping to bring everyone together for this edition.

2020 is three years away so meanwhile have a look at the upcoming merch, available on the Tokyo2020shop.jp website (in Japanese).

Sausage is an overlooked way to prepare waterfowl, but it’s great for dealing with difficult flavors, such as those from divers. Of course, there’s no reason you can’t use mallard either, just save the breasts for the grill and use the leg meat instead. One mixed, you can use it in any number of ways....

Naruto Creator Reveals Why He Killed Off Neji Hyuga

Neji was a member of Konohagakure’s Hyuga Clan. He was a very powerful shinobi, but more than that he was a fan favorite. That didn’t stop Masashi Kishimoto from killing the Hyuga prodigy off. During the 4th Great Ninja War, Neji met his death protecting Naruto and Hinata from an incoming Ten Tails attack. This...